From the foot of Mt. Arbel on the other side of this “hill” from Nazareth lies Migdal; we know it by it’s most famous resident, Mary of Magdala.

You might know her simply by association. The woman at work…you know, the one they say cheats on her husband. People talk about her behind her back, an easy subject of juicy gossip. After all the rumors are….(you fill in the blank). The problem with this scenario is that it is not true; the problem is complete misconception and an explosion of untruth by people who don’t talk with her and don’t invest anything in a relationship with this woman who desperately needs a friend. Follow me through a couple of paragraphs to set a stage.

Professionally, I operate and administer a mobile home park investment company. If it involves mobile homes, trailers, modulars, you name it, then my family, my staff and I have probably seen it. One of my favorite jokes is: What do a hurricane and an Alabama divorce have in common? Sooner or later one of them is gonna claim the trailer!

Mobile home parks in the South have historically been called trailer parks. They come with all kinds of pre-conceived, and often well deserved, bad reputations (poor management can mess up anything). Think: jacked up cars, mangy dogs tied to trees, chicken coops, beer cans —- or Jack Daniels if the party was good, and rusty appliances sitting on dilapidated decks.

People in “trailer parks” also get a bad wrap. You can rest assured if there is a tornado in Mississippi that CNN will go directly to the place where the worst mobile home destruction has taken place. I won’t mock anyone, but you can bet the words “truck… AND I’ve never seen nothing like it…” will be spoken by someone with a “The South will Rise Again” hat. I say this somewhat in jest, but why is it you do not ever see a school teacher or office manager interviewed? Seriously, people in the South do have teeth (and so do almost all people in Mobile Home Parks).

Demographically, we think about trailer park residents as second class citizens. Before I continue let me clearly and emphatically state that nothing could be further from the truth. Society has systematically relegated drug dealers, hookers, low wage factory workers, red necks, etc to places like trailer parks. Thanks, Hollywood. Like everything else, your stereotypes screw up everything!

The truth is that our residents (and I’ve had tens of thousands over my 27 year career) are just like everyone else. Our market is a mix of moms and dads, single parents, young couples, singles, young professionals, contract workers, paralegals, nurses, chefs, skilled factory workers, hospitality workers, some college educated … all seeking to build a better life. For financial reasons, sometimes for lease flexibility options, they choose to reside in manufactured homes.

It’s fair to say over the years we have had our share of unsavory characters. We’ve also had some of the best. I share all of this information to ask: how likely would you be to engage in a relationship with someone unlike you simply because we don’t relate to a place he or she lives? How likely are we to talk with and engage the misunderstood woman at work or a modern day Mary Magdelene? 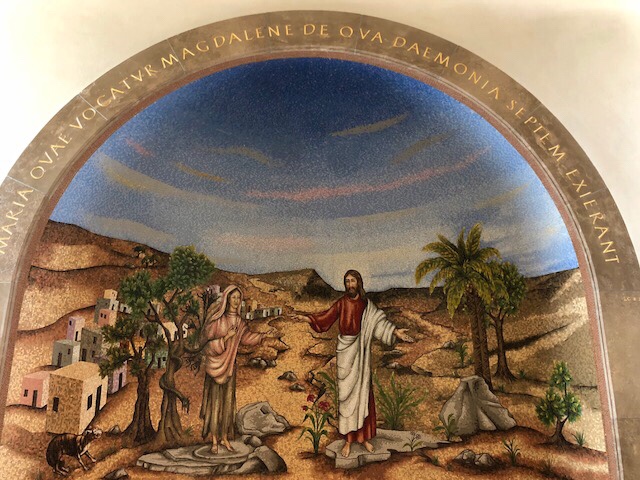 (Inside the chapels here, this is one of 4 mosaics. 160,000 Murano glass tiles depict Jesus driving out Mary’s 7 demons).

Ironically, the first place we see Mary of Magdala mentioned in scripture (Matthew 27:56) is at the end of Jesus’ life as he suffers on the cross. Yet in the additional 13 times Mary Magdalene is mentioned we learn more about this mysterious woman.

Today we visited Magdala or at least the place it once existed. Like many Holy Land sites its history reveals itself through the puzzle of archeology. It was a small village of 3000 to 4000 known as a fish processing industrial town at the foot of Mt. Arbel. It’s story is fascinating, there is a link included at the end if your interested. 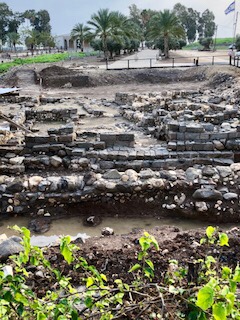 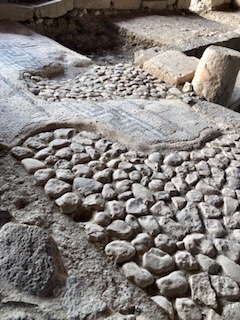 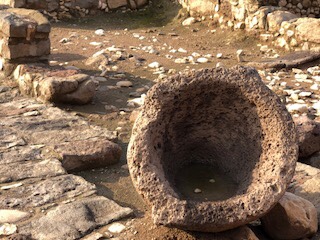 (Excavations of town and the synagogue in Magdela.)

Mary M. Is often misunderstood. People frequently think she may have been the female sinner mentioned in Luke 7, but reread it. There is not any reason to believe it is her or reference specifically to her. We know Christ cured Mary M of seven demons.

We also know Mary M accompanied Mary, mother of Jesus, to the tomb the third day after the cruxfiction to find him missing. Can you, especially you moms, imagine the stone cold numbed Mary M feels as she accompanies Mary Mother of Jesus to prepare His Body after cruxifixction? Mary M, frequently, is in the company of other women. She supports Christ in his ministry.

More interesting than any of this, scriptures tell us Mary Magdela was the first person to witness Christ after this resurrection. He charged her to go tell the disciples He was risen. Can you imagine, simply imagine after everything that had happened what she must have thought? And the disciples? They were probably wondering who spiked the olive oil!

As for rumors and discussion she married Jesus: I don’t know. I truly don’t care. I’ll leave that to the wondering, hypothecating minds of speculative theologians and guys like author Dan Brown who make millions writing Da Vinci Code genre novels.

If this woman were formerly of ill repute (and she was absolutely someone who was previously “demon possessed”) in modern day terms and she was from somewhere outside your demographic—-the trailer park at the county line, for example, then how would you treat her? How do you treat her? We encounter Mary of Magdala in someone we meet every time we leave our homes!

Like many other Bible characters we are given just enough information to make Mary M tremendously misunderstood. I have this quirky approach I like to call FaceBook theology…maybe philosophy. Even if you’re not on Social Media you’ve seen the MEMES. My favorite and the one that applies most appropriately to today is this one:

As we drove away from Magdela today I thought about Mary M. and this place she lived. Why did they bring us here….to a place that is not even a place any longer? What would the takeaway be? It hit me: Be kind.

We live in a world characterized by division. Division by racial tensions, inequality among the sexes, struggles across demographic classes, and more. Every group jockeys for position. It’s tiring and sad; there is no end in sight.

The truth is if we are all created in God’s image, then I believe He doesn’t divide us as we divide ourselves. We are called to treat one another with kindness, to respect the dignity of humanity and the Divinity He placed within each of us even when we don’t understand (and I often don’t understand), and to honor God by loving one another as He commanded. Be kind