It is the stuff that lends magic and mystique to pirate stories, treasure hunts and fairy tales. People are in search of the answer to a great mystery…whether it be buried treasure, a piece of a puzzle, or a long lost answer to a question. An X on a map denotes you have arrived. During Spring Break we encountered an X in the middle of the Elm Street in Dallas. And while it did not hide any treasures, it certainly marks the spot of an historic American tragedy: the assignation of John Fitzgerald Kennedy. 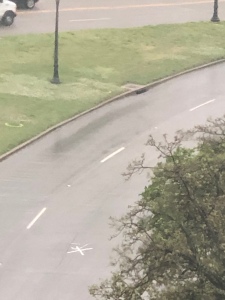 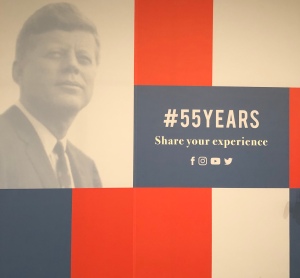 We’ve heard the story and seen the images all our lives. Jackie, dressed in pink adorned with her iconic pillbox hat, with the president by her side proceeded by motorcade through Dallas en route to the convention center for Mr. Kennedy’s speech. The mysterious Lee Harvey Oswald observed from the corner 6th floor window of the Texas Book Depository on the right side of Dealey Plaza (heading out of town). As my friend Dane would say “the short of it is” the Warren Commission Report declared a single shooter (Oswald) acting alone carried out this assassination. Whoa there….not so fast! A visit to this place rapidly opens the possibilities for the numerable other scenarios people have contemplated for more than 5 decades.

Let me be the first person to admit that we don’t know what we don’t know. Conspiracy theories fill articles, books and millions of history lovers’ minds. Admittedly, I’ve never been more on board convinced something additional happened…more than Lee Harvey Oswald could have done alone. There is simply too much evidence about ample opportunity. My family became so intrigued that we returned to visit a second time in as many days to take in possibilities.

Interestingly, up until the time of JFK’s assassination it was NOT a federal crime to kill a President or Vice President. It seems so archaic doesn’t it? This created an interesting dynamic between local police and federal security detail…but that’s a story for another day. For disclosure purposes the information here is based on what curators and tour guides reveal at the Sixth Floor Museum and in Dealey Plaza.

Keep in mind the motorcade was only going 11 miles per hour. It turned right onto Houston Street heading directly toward the building corner where Oswald stationed himself. From the sixth floor window this perspective gave a would be assassin unobstructed firing access.

The Oswald Story: Today the corner room is recreated exactly as Mr. Oswald would have found it and left it on that Dallas Friday. While I am no marksman at all (in fact, if I have a rifle ya’ll better haul and hope that I don’t drop it or get startled and turn around) it seems quite strange looking out the window. At one point in the procession the limo faces squarely in line with the line of sight. However, it is not until the car turns left onto Elm Street and is heading out of Oswald’s sight that the ‘fatal shot’ is fired. For a gunman to aim toward Elm from the angle of the building’s window required more skill and the ability to focus more clearly. 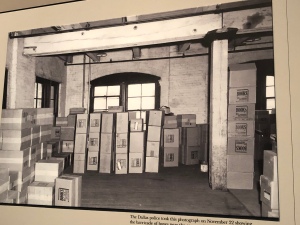 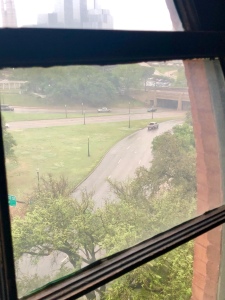 (These are some of the cameras on site that captured images. The one below is the renowned video camera bystander Abraham Zapruder used; it captured the assassination in a segment of extremely grainy footage.)

We’ll not ever know how Oswald’s story would have unfolded. Recall Dallas nightclub owner of mafia lore, Jack Ruby, fatally shot Mr. Oswald only one day after JFD died.

The Grassy Knoll: It is surreal to stand on the famed grassy knoll. I’ve never really stood on a grassy knoll let alone see one except maybe on an old episode of Little House on the Prairie. But there we were facing the road. Behind us stood a wooden slat privacy fence. As evidenced by photos there has been a fence on this site since at least 1963. Witnesses from November 22, 1963 claim they saw a puff of smoke from behind the fence. Is it possible that an assassin could have aimed from this vantage point? The site line was and still is wide open, gave direct view of JFK and would have easily hidden someone in a crowd. (Note: a worker in a nearby train switching station tower could easily have spotted a shooter in this position).

The Drain Theory: My dad has long believed, and he may be on to something here, the fatal shot discharged from a storm drain on Elm. Evidence including direction of the bullet, the fact that JFK was thrown back (as opposed to being pushed forward had Oswald shot him from behind), clearer line of site, and complete concealment from view lends high credibility to this theory. The problem is it would be difficult for a shot to fire from this low angle to hit the top of person’s head (particularly when a firearm barrel would be restricted by the presence of a concrete drain’s top giving the gunman only inches to maneuver). 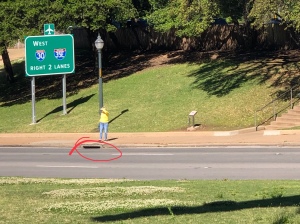 The Great Escape: Interestingly, the railroad worker from that nearby switching station tower witnessed a man climbing from a drain grate. What had he seen? Only a guy coming through a drain or did his vantage point let him see someone shooting from behind the fence on the grassy knoll.

We simply do not know what the train yard worker saw. The next day the railroad worker was found murdered. Coincidence? (This photo shows the vantage point of the supposed murdered witness).

I take pictures of everything. However, my teenaged son threatened me not to take photos of our family at this location. What he called disrespectful I call research….yep…that’s it….research. Nonetheless, I heeded his prompt…threat! He is correct, however, it would be really nerdy and over the line to “say cheese” at the sight of a murder.

Concerning what our government knows you may recall early in President Trump’s presidential tenure he had the privilege to release the previously classified information withheld from public knowledge. He chose not to make information public. Why? What do we not know; what do they not want us to know?

Nearby from atop the Geosphere Observatory on Reunion Street visitors enjoy views of every Dallas block . Each view is accompanied by a photo board, text and a story monitor. The one over Dealey Plaza features Mrs. Kennedy’s Secret Service Agent, Clint Hill. He is the last surviving passenger from the limo detail from that November, 1963 day. On video Mr. Hill clearly reads what sounds like a highly scripted line…the same one they’ve fed us since the Warren Commission released its report (and we’re all so trusting in government reports). He says in stoic, monotone script something to effect that “there was one shooter, the shot came from the 6th floor of the Texas Book Depository, the shot was fatal, it was fired by Lee Harvey Oswald. That is all.” It is as if Mr. Hill was told what to read and how to read it….quite matter of factish, with zero emotion, with no facial expression or vocal personality whatsoever.

Thaedra, Pierce and I walked away convinced we’d heard the words of an old man afraid he would lose his government benefits and retirement if he shared anything other than the same old same old. Alternatively, maybe the Warren Commission’s “company line” about what happened provides a unified coping mechanism for a Secret Service detail that failed to protect a president’s life. Interestingly, the motorcade’s security detail urged the president to make use of the limousine’s glass protective top. JFK refused it wanting to be closer to the people as he worked his way through the 5 city campaign tour.

There remain so many facts, theories and possibilities that people will likely not ever know the full story. I wrote this blog not to jump in with conspiracy theorists, but to reinforce observations and to keep alive the search for truth…especially to a younger generation not as in touch with American history.

The second time we visited was a spectacular day. I spent quite a bit of time walking and looking at what could have been the case. As I turned and walked away from Dealey Plaza it occurred to me that if the whisper of the winds rustling the trees leaves could talk, then maybe they could reveal the truth. But the truth is we may never know what actually happened in Dealey Plaza where X marks the spot.