Chicago 1995: My wife and I took the first trip of our relationship to a wedding over Independence Day weekend. The venue was a massive revival style Greco Romanesque mansion originally constructed by J. Ogden Armour. You may remember “Armour hotdogs, the dogs kids love to bite.” The Armour company’s potted meat and other products were precursors to Spam….the canned pork…fat…sodium…gelatin…whatever it is….not computer spam. During the reception the groom’s band took the stage and played one of their original songs. While I don’t remember the title, I vividly recall repeating lyrics: “Ten Pieces of My Heart.” It was a fantastic, upbeat song about broken dreams and living a life you do not choose. 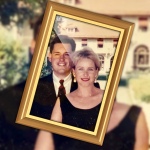 (Thaedra & me at the Armour Mansion outside of Chicago: July, 1995)

She is the girl in line behind you at Wal-Greens. Maybe she is the customer service representative behind the teller line at the bank. Possibly she is a he…not a transgendered person, but rather the desperate, hopeless and roughed up looking teenage boy we see roadside holding up a sign “Will work for food.” We easily overlook victims (and survivors) of sex & human trafficking. They’re mostly passersby to people who disguise one of the darkest secrets of modern slavery and the world’s oldest profession.

Not by choice, but by forced circumstances they are too afraid to leave. Fearful of threats of their families being killed, themselves being killed, ending up homeless or hungry or sick with nowhere to go they remain. Blank faces, real life girls, they’re Tina Turner’s Private Dancer, OR Julia’s Robert’s “Pretty Woman” (good gosh I’m so old that I remember this stuff). They sell themselves, their bodies, their souls for a buck…and it’s a buck they don’t even get to keep.

It’s easier to believe life is lollipops and rainbows. It’s easier to tune in to specialty network television and focus on other seemingly unrealistic circumstances. Think about what I call the TLC effect. It’s that Jim Bob Duggar thing requiring his children to “side hug” until they are married. All that pent up….um…let’s call it energy. It’s why they have 67 Kids and Counting (TLC insider joke for those of you who watch). Have you ever seen one of their weddings? These young newlyweds literally run down the aisle immediately after nuptials, lock the door to the nearest room and get their freak on while the guests are still in the pews. Awkward on so many levels that you have to see to believe, but a great comparison about naivety in modern times.

Once Was & Maybe Not Always Will Be

A world away, in a land never known to or forgotten to most lies the ancient excavated city: Bet She’an, Israel. It’s the place where King Saul and his sons were stripped, staked to the City wall and burned. (Honestly, until my trips there I’d never heard of the place…and I grew up Baptist…I must have missed that day). During the City’s hay-day Roman Bathhouse culture abounded. Beside one of the excavated public bath houses guides tell you they found the remains of hundreds of young male bodies. Young boys who, for whatever reason, were raised to work in the bath houses as prostitutes…disposable lives…for the fleeting sexual pleasure of society. The practice widely infiltrated ancient Roman culture.

(I shot the following at Bet She’an about a year ago).

To stand there gazing over the excavated ruins, one cannot help but wonder what horrors these boys must have faced. The sobering fact is that the boys’ reality makes modern day banter and locker room talk about massage parlor happy ending jokes become offensive and disrespectful to the generations of males who sacrificed body, heart, & spirit in this place.

Fortunately modern culture does not afford this oppressive abuse and behavior to manifest. Or, does it?

Not in my Backyard

It exists…prolifically! My hometown, Charlotte, is at the cross roads of two major interstate highways. Except for Atlanta, it is the largest Southern city between Miami and New York. We’re accessible by Greyhound, AmTrack; we’re home to the sixth busiest airport in the United States. We have NFL Football, NBA Basketball, and a massive NASCAR presence. Simple demand creating a market for “sex” trade workers is met by a supply of people, whom against their will, complete the economic model.

Indentured to a life of sexual slavery, these women live lives a lot like the boys of the Roman culture bathhouses.

•Since 2007, the National Human Trafficking Hotline, operated by Polaris, has received reports of 34,700 sex trafficking cases inside the United States.

•In 2017, the National Center for Missing & Exploited Children estimated that 1 in 7 endangered runaways reported to them were likely sex trafficking victims (hopefully, survivors).

Charlotte is the number one spot in North Carolina for human trafficking, and on any given day, the state of North Carolina ranks in the top ten in the nation for human trafficking. “80 percent of all trafficking victims in our country of all ages were born in this country so this is the girl next door,” said Bo Quickel, the founder of Vigilante Truth. An international airport, conventions, sporting events, concerts and highways make Charlotte the perfect breeding ground for the dark industry.

“It’s easier to sell women than it is to sell drugs,” Quickel said, “than it is to commit internet fraud,” he continued. “Selling a woman is pretty easy business, sadly enough, but it is true.”

In fact, Quickel says it’s over a $10 billion industry.

Desperate beyond any desperation we can imagine, these people need a champion. There is a grove of Dahlias and a place of escape for them.

I believe everyday unsung heroes are the brightest spot of any generation. You don’t find these heroes in a sport arena, hear them on an iPod and see them on movie screens. Colin Capernick didn’t give up anything with the possible exception of good taste (not that he ever had it…and pleeez, don’t let him become a Carolina Panther). Want to know a real hero? I’ve discovered one in Gayle Smith . This charming, well educated, Christian hearted lady has her heart and mind set on charting a course….making a difference for women who are trapped in the jaws of trafficking. Set on a journey to establish a mission, she sold her home, quit her job and has worked TIRELESSLY for this cause

Gayle sees people as ALL of us should see people. She sees struggle, heartache, desperation to move beyond the entrapped servitude of a pimp or a sugar daddy.

At the expense of sounding like the old Jeff Foxworthy & Larry the Cable guy comedy “I believe” skit:

•I believe Gayle lives into her dreams, mission and purpose. Following the example of Christ, she has “picked up her cross to follow (Jesus).” Talk about commitment? Gayle sold her home and has begun investing her asset base in her vision.

•I believe Gayle is God’s shining, angelic beacon of hope among a population of women who would, otherwise, remain captive to a life relegated to either sex or human trafficking.

•I believe Gayle’s focus to provide a safe house complete with vocational training and redirection getting these girls out of tragedy’s trajectory is a God inspired and a tangible way she makes a difference. We can help, too!

•I believe trafficked & pimped people walk away from a “session” or an “encounter” feeling like that song I heard in 1995 – not living a life they choose – with their hearts shattered into pieces and souls compromised from an oppressive reality they cannot singularly escape.

For the last few years my crew and I have attended the annual Dahlia Grove fundraising event. It rocks! Great company, the best of friends, fun auctions, food, drinks and the promise to help someone.

Save a Single Starfish

You might ask: What difference does it make if we help a few girls? The answer is simple. Have you ever cast a stone into a placid pond and seen the ripple effect? Have you ever heard the story of the star fish (poem by Loren Eiseley)?

A young girl was walking along a beach upon which thousands of starfish had been washed up during a terrible storm. When she came to each starfish, she would pick it up, and throw it back into the ocean. People watched her with amusement.

She had been doing this for some time when a man approached her and said, “Little girl, why are you doing this? Look at this beach! You can’t save all these starfish. You can’t begin to make a difference!”

The girl seemed crushed, suddenly deflated. But after a few moments, she bent down, picked up another starfish, and hurled it as far as she could into the ocean. Then she looked up at the man and replied, “Well, I made a difference to that one!”

The old man looked at the girl inquisitively and thought about what she had done and said. Inspired, he joined the little girl in throwing starfish back into the sea. Soon others joined, and all the starfish were saved.

Our help can make a difference for just “that one.” Join the cause, be part of the ripple of positive change. Soon others will join; and we’ll see how many starfish…how many pieces of a heart we can save.

Please check out http://www.dahliagrove.com. The fundraiser is Friday, 4/5, and is a blast. Your support will make a difference to someone.